A Good Class Bungalow (GCB) on Belmont Road has finally found a buyer after it was first offered as a mortgagee sale at a Colliers International auction more than two years ago. Located on a 16,329 sq ft site in the exclusive Cornwall Gardens GCB area, the property was sold for $18.6 million ($1,139 psf) on Oct 2.

According to a source involved in the transaction, the buyer is Carol Cheng, the daughter of Wing Tai Holdings chairman Cheng Wai Keung. 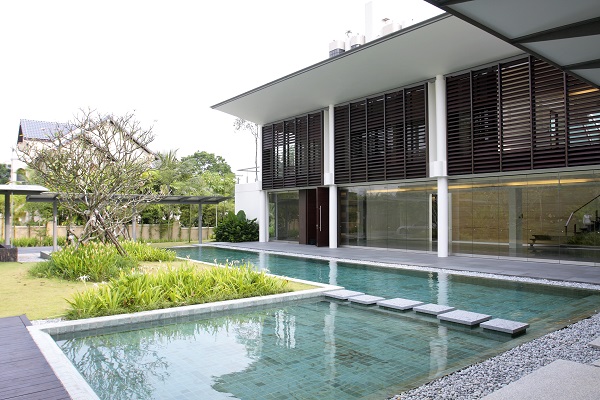 The two-storey house has a built-up area of about 7,200 sq ft with a contemporary tropical design with high ceilings, skylights, timber frames, and full-height windows. The house was bought for $13.8 million ($845 psf) in September 2007 and rebuilt as its current iteration in 2009. It was then sold for $16 million ($980 psf) in March 2010. The owners stayed there for several years until the property was foreclosed.

When the house first appeared at the Colliers International auction in January 2017, it went under the hammer for $25.5 million ($1,562 psf). It would be offered for $25 million ($1,531 psf) at a second Colliers auction a month later. In both instances, the property did not receive any bids and was withdrawn from the auction. The property would later appear in the private treaty lists of the various auction houses.